Marianne Williamson – her run for president: why this intelligent, courageous and compassionate woman should be fully supported in her political efforts! 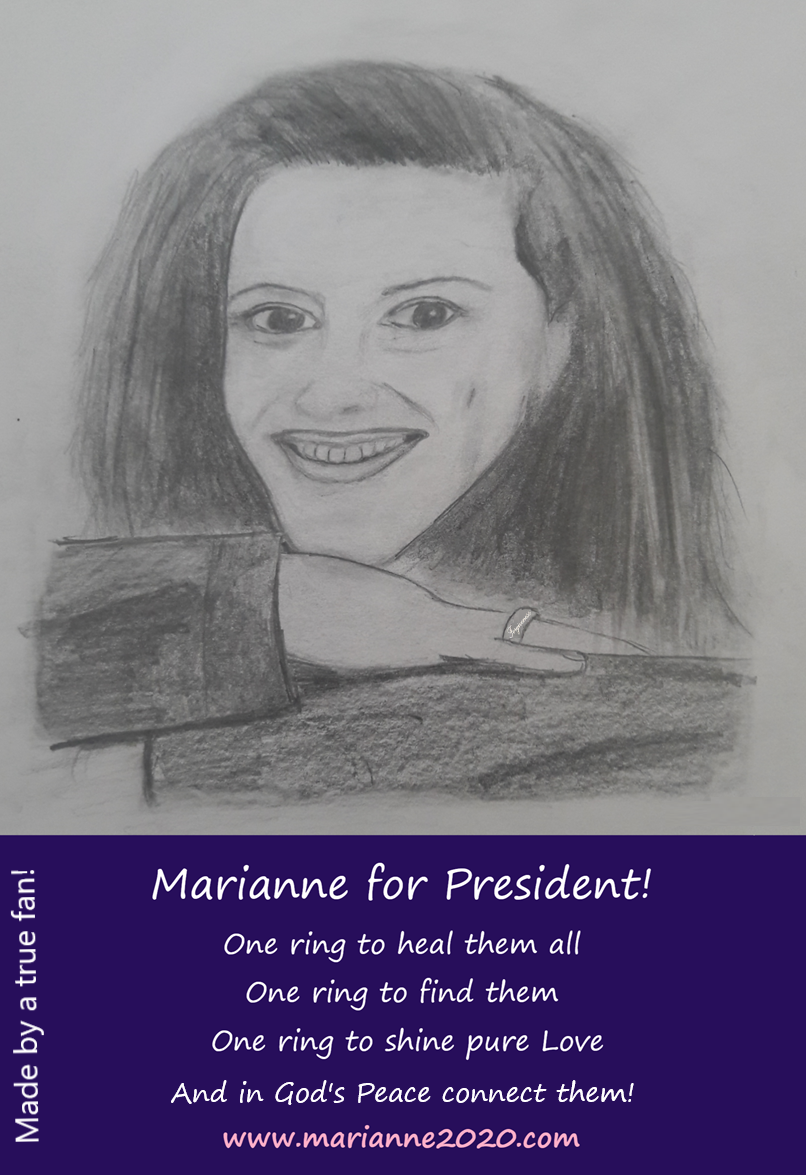 The United States have the opportunity to have a wonderful new president in 2020, the first female president named Marianne Williamson. Williamson is speaker, activist and writer of numerous bestsellers. Her most famous quote, from her book A Return to Love, is often misattributed to Nelson Mandela. In her mega bestseller Williamson writes:  “Our deepest fear is not that we are inadequate. Our deepest fear is that we are powerful beyond measure. It is our light, not our darkness that most frightens us. We ask ourselves, Who am I to be brilliant, gorgeous, talented, fabulous? Actually, who are you not to be? You are a child of God. Your playing small does not serve the world. There is nothing enlightened about shrinking so that other people won’t feel insecure around you. We are all meant to shine, as children do. We were born to make manifest the glory of God that is within us. It’s not just in some of us; it’s in everyone. And as we let our own light shine, we unconsciously give other people permission to do the same. As we are liberated from our own fear, our presence automatically liberates others.”

For more than 35 years Marianne has been active in what is sometimes called the ‘selfhelp-sector’. According to Williamson, her own life transformed radically largely thanks to the spiritual psychological handbook A Course in Miracles, which is officially published by the Foundation for Inner Peace. The goal of A Course in Miracles is to help you to truly forgive, to let go of thoughts and feelings such as fear, guilt, anger, so that a deeper peace is found. The course aims at helping you in making the transition from a though-system based on fear and guilt to a thought-system based on peace and love. Currently there are millions of copies of the book in print, partly thanks to the work of Williamson. Much of what Williamson writes and brings forward in her speeches is based on the course. Her own carrier took flight when she was invited to the Oprah Winfrey show and 1000 copies of her book were given as a wonderful present.

In case you find Marianne too ‘new age’, consider that we all want a new more peaceful age deep in our hearts. Williamson is a fit leader to steer humanity in the right way. Already in 1989 Williamson founded project “Angel Food’ (https://www.angelfood.org/about-us/). A charity foundation in Los Angeles that each year serves 500.000 meals to people with a critical illness who can’t cook for themselves. Williamson is also co-founder of “The Peace Alliance”. A organisation that has been lobbying since 2004 for a official ‘US Department of Peace’ – an organisation on the level of government that must guarantee that more attention is being paid to and more money will be reserved for the cultivation of peace in the U.S. and outside the country.

Since the nineties Marianne has been speaking about the large amount of prisoners in the United States. Something that was not or just barely spoken of in the political arena before here political campaign in 2014 for a seat in the Senate. A campaign that was supported inter alia by Bernie Sanders and Alanis Morissette. Williamson ended 4th out of 16 participants. In her own words she has learned a lot about campaigning. She organised several ‘Sister Giants’.  Congresses mostly focused on empowering woman and making a connection between politics and spirituality. Bernie Sanders was a keynote speaker on one of the congresses. Williamson does not believe in a strategic approach that much, but rather in speaking her mind about her deepest ideals with love and compassion and sticking with this.

Her ideas for repairing the relationship between the ‘black’ and ‘white’ community by financial restitution are already backed now by Harris and Sanders. Both who which are other candidates for the democratic nomination. Williamson lets us know that politicians should not act as a handmaiden of the corporate sector. The welfare in the country should not flow to just a few percent of the population but should circulate in a fair way through the whole of society. Her most recent book is called:  A Politics of Love: A Handbook for a New American Revolution. https://www.barnesandnoble.com/w/a-politics-of-love-marianne-williamson/1128745899;jsessionid=F537AF086DD1885EEB10A586E1594DAA.prodny_store01-atgap08?ean=9780062873934&st=AFF&2sid=HarperCollins%20Publishers%20LLC_7252169_NA&sourceId=AFFHarperCollins%20Publishers%20LLC#/

The extort of citizens by the corporate sector and some politicians needs to end! Like Williamson says at the end of her speech in Los Angeles: “Boundary, that stops right now!”

We can NOT just hope but can also take appropriate action so that we will be able to see such a fantastic woman as Ms. Williamson become president of the U.S. in 2020! No matter where we live in the world we could help in a fair way. We can do this by telling others about Williamson so that in (hopefully a short) time we won’t be able to imagine a media without this both strong and fine woman. Williamson was already interviewed by CNN. That this trend may continue and lift her up. If you live outside the U.S. be careful with thinking that these elections do not matter to you. Because of the influence the U.S. it surely does matter!

Share the messages of Williamson if the Small Silent Voice in you tells you to do so. Take action for example by offering your help to create an app for the campaign (that informs and educates people for example by giving simple and short answers to much asked questions) if you are good at that sort of stuff, or write a good, clear and loving article, make a video, sing do another kind of performance and share her flyers. Use your beautiful talents to help! Bring her presidency a bit closer.

And if Williamson wins the democratic nomination, then of course, if you have the opportunity, you vote for her in 2020. You make sure that you do what is necessary to be able to vote! And even if she doesn’t become president, her campaign can still have meaning by influencing the public debate (which will be the case even more with your help). This campaign cannot really fail! Let’s make sure it will be the best campaign possible. May it be totally and completely in harmony with the universal flow of love!

How beautiful it would be to have a president that holds the space for everyone to develop themselves – to let themselves be evolved –  in a peaceful way and have a truly happy and wonderful life together with everyone else! How amazing it would be to have a president  that is a loving, straight to the point, powerful and humane example for all of humanity. A president that inspires all of us to rise as a phoenix from the ashes of chaos, to spread our wings and fly out into a New World!

Want to find out more? Take a look for example at: